Two weeks ago, I started a two-part series on the best sensory toys. In that post I shared what sensory toys have been the most helpful to us, and in this post I will add more to that list and include some toys that have been recommended by others.

Based on one study, around 78 percent of children with autism have Sensory Processing Disorder. Often children who’ve been neglected and abused have sensory issues too.

Like I said in the last post, it takes a lot of trial and error to find out what your child needs and when they need it. And, even when you figure it out, it will always need tweaking. So, here you go.

1) Water bottle half-filled with water. This has been an easy (and cheap) go-to when Jeremiah’s sensory needs are out of whack. Sometimes when Jeremiah’s hitting things, frustrated, jumping and chewing, this helps him calm. But it seems like I say this regarding most of the sensory items we use. 🙂 Occasionally, I can be confused with a zoo monkey, pulling out all sorts of things and trying to fix what’s bothering my little guy.
Jeremiah likes to shake the water bottle, I think what helps is both seeing and hearing the water being shook. If you’re able to seal the lid to your liking, you can add food coloring.

2) Pokey (soft and hard) animals. Some of these contain lights and some don’t. There are times when your child will want lights and other times they

won’t. My mom finds these for us all the time and Jeremiah likes them. You may want to look for ones that are BPA-free, or safe for chewing. I wasn’t able to find the toys we have online, so here’s a photo of ours so you can do your own search. Hope you have better luck than me!

3) Music. This can be calming or upbeat, depending on what mood your child’s in. Occasionally Jeremiah likes to push buttons on toys that play music. I hate to admit that I still play Baby Einstein music videos, although he doesn’t like them as much as he used to. I call them “Einstein” so he doesn’t feel like he’s watching a baby’s movie. These videos are often very calming to him. He’s also used music to calm himself at school. Jeremiah’s school has a little music player for kids and Jeremiah holds it up to his ear and listens to the music, which also happens to be Baby Einstein.
And, something really cool, a couple weeks ago when I picked Jeremiah up from school, he was in his red chair, the teacher was singing Bear Hunt. and his aid was helping him do the motions with his hands, and he was HAPPY and enjoying it! So, I’m searching out their CD so we can use it at home.

4) Chewies. My sister-in-law, Jolene, is a speech pathologist and she asked

what we wanted her to get Jeremiah for his birthday one year. We asked her to get whatever sensory toys she felt the kiddos she worked with liked the most. She bought this wrist band and Chewy Skool Kid Chewable Necklace. I like the Chewable Necklace pictured because it has a breakaway hook so your child doesn’t strangle themselves. Jolene also introduced us to the awesome slinkies I mentioned in The Best Sensory Toys (Part 1). The ones pictured here haven’t been a hit with Jeremiah, but I think he’ll use them in the

future, I mean it took him a while to get used the slinkies too.

5) Arks Z-Vibe. We bought this for Jeremiah’s oral needs because he was chewing on his shirts. The Developmental Interventionist who used to come to our home suggested using this Z-Vibe. It’s expensive, but we see it as an 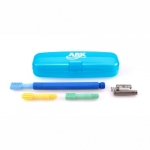 investment for later even if Jeremiah doesn’t use it now. The one in the photo is the one we bought and the link I provided should take you there. Make sure you get a battery if it’s not included, as it’s specific to the Z-Vibe.
It’s suggested in the information that comes with the Z-Vibe that you work slowly into using the product in your child’s mouth. I started using it on his hand and moving up his arm, and eventually hope to use it on his mouth. If I was more consistent, we might already be there, but I haven’t been.
The Z-Vibe also had pencil tips you can add to it, which might be helpful for writing.

6) Hammock Swing. Okay, this is so cool. I WISH Jeremiah used this, but he doesn’t. There have been a few times that he’s stuck his upper body in and twisted a little, and of course I’ve worked with him on it numerous times. Again,

this might be something he uses later. I think so many kids would benefit from this, but getting them to try it for any length of time could be difficult. One of the reasons Jeremiah may not get inside it is it swings and twists easily, so you might consider if you can anchor it to the floor.

7) Cozy Canoe. I haven’t heard any reviews about this, but I had to share it. I really wanted to get this for Jeremiah for Christmas, but they were sold out. Sold out! And, it looks like they’re still out of stock. I guess it’s a top seller if it’s sold out. It’s large and it’s expensive, but seems perfect for children with sensory needs.

8) String. Yes, simple string. I follow a couple Autism mom’s blogs and both their daughters love to pull string apart. One of them has her string in almost every photo taken of her. It’s something that helps calm her, similar to what Jeremiah’s doodle pad does for him, and before he used the doodle pad he carried around mini cars from the movie Cars.

I hope these ideas help give you some direction as to what to get your child for their sensory needs. If nothing, the links will take you to some great sites that sell other items geared toward our kiddos who need something extra.

Be sure to check out the CONTENTS page for more posts on autism.