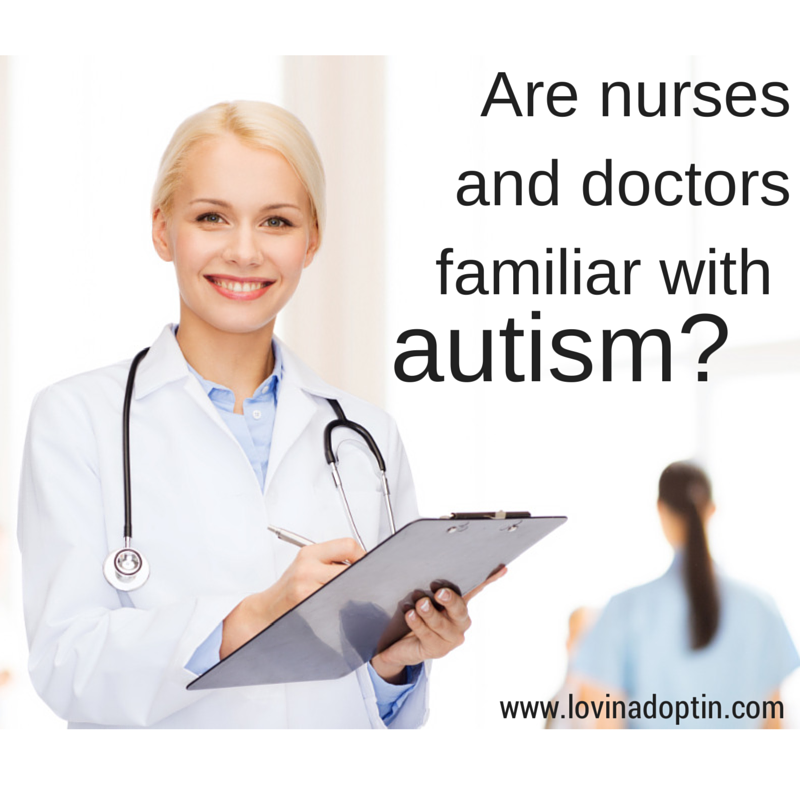 Are nurses, doctors, radiologists, and other hospital staff familiar with Autism? I wish the answer was, yes, but sometimes they don’t know enough to make a visit to the hospital or ER a pleasurable experience for our children who have Autism.

Wait a minute. Did I say “pleasurable”? Whose visit to the hospital is a good one? Most aren’t, and when our Autistic child is facing some time in the antiseptic palace, it’s downright scary. We’ve been there. We haven’t been anointed with as many trips as many other families who have kids with Autism, but we’ve been there enough to realize that not every nurse, doctor, anesthesiologist, etc. know how to handle and care for an Autistic person.

I wish they did, but living with the Autistic child every day is far different than seeing one every few days. Seeing an Autistic persons interactions on a day to day basis teaches us far more than hours spent inside four walls in some seminar where another highly accomplished physician teaches on the medical care of an Autistic child.

Dr. Bruce Perry says, “Many physicians find “psychological” or social aspects of medical problems less interesting and less important than the primary “physiological” issues.” Caring for the psychological aspects of the Autistic person is paramount, there isn’t much you can accomplish if you don’t meet the needs of their psychological self.

A great example of this was when we showed up at an after-hours urgency care center after Jeremiah had a seizure. I went inside to check in while Justin waited with Jeremiah in the car. I told the receptionist that Jeremiah has severe Autism and couldn’t come in until they were ready for him. She took me very seriously (not the norm) and set everything up so it was a smooth transition when we brought Jeremiah in.

The receptionist offered that he come in through an alternative entrance in case he was afraid of sliding doors, the doctor was supposed to come in right after we entered the room, but Jeremiah’s primary care physician called him at that moment to discuss what happened to Jeremiah (I’d already spoken with her on the phone – yes, we have an excellent doctor). We made plans beforehand to meet Jeremiah’s psychological needs, we brought in the magic DVD player.

Surprisingly, the whole visit went really well. Why? It began with those exceptions the receptionist put in place which put us, the parents, more at ease, and led to less stress. It continued with staff that recognized what they were facing, they referred to us in each step they took, whether it was getting his weight, taking his temperature, or looking in his eyes and ears.

We’ve had some less than acceptable experiences in the hospital, not every situation goes as well as the one above. When receptionists, nurses, and doctors don’t work with Autistic individuals on a regular basis, their understanding of Autism isn’t going to be as satisfactory.

After one of our trips to the hospital, I was sent a survey. I filled it out and wrote an additional letter. The letter was written in a kind manner, but pointed out that we felt there wasn’t enough awareness of Autism. I later received a call from the group who receives the surveys, and she was recommending I speak to the director of pediatrics at our local hospital. I then got a call from the director, she asked me to come and speak at their staff meeting.

I spoke to the pediatric staff last week, and they were grateful for the information I shared. None of the doctors and nurses who’d seen Jeremiah were in attendance, which was disappointing, but this is a start. The director even asked to share my information with the rest of the hospital.

“This is excellent information. I would like for the whole hospital to know about this.”
– Geri Tamborelli, MS, RN Director of Women’s Health & Childbirth Services

But the thing is, you can make a difference. If you approach others in a kind way, there’s a good chance they’ll be receptive to what you have to say.

When I shared with someone that I was going to speak to the hospital staff about Autism, they said, “Why? They know about Autism.” We often think that the medical community knows everything medical, and they do, but before you can assist an Autistic person in a medical sense you’ll need to pay attention to that key piece, the psychological. If they do that, they’ll get much farther, and the Autistic patient and their parent will be more at ease.

You can receive each post made to Lovin’ Adoptin’ by subscribing in the upper right corner. If you’re on a mobile device, you can do this on the web version. You can also follow me on Facebook, Twitter, and Pinterest for more helpful information and tweets.

4 replies to are nurses and doctors familiar with Autism?