In the movie, Blood Diamond, I witnessed a relationship that I thought resembled what should take place in adoptive and foster families.

The movie, Blood Diamond, is based in Africa, during the Civil War in Sierra Leone. During the war, Solomon’s young son, Dia, is captured by the rebel army. He’s forced to perform terrible acts (including killing), and is given drugs.

When Dia is rescued by his father, he doesn’t even recognize him, or doesn’t want to. His terrible deeds overwhelm him, he feels worthless and horrible about himself. The rebel army has taught him to forget about his family and serve the “cause.”

Shortly after Solomon rescues him, Dia points a gun at his fathers head. Dia seems serious about what he’s about to do, but Solomon knows his son and reaches out with forgiveness, mercy, and love. Solomon slowly moves toward his son, telling Dia that he’s a good boy, not bad, he loves him, and his mother loves him and misses him.

Our children are hurting, they come from a place of pain, and just because they leave that place and we offer them love and a wonderful life, it doesn’t mean that they’ll forget that internal pain.

Traumatized children will reach out with anger, hate, harsh words, manipulation, and disobedience. In turn, their internal turmoil can hurt us, the parents who are trying everything in our power to help them succeed. But, we need to look at how Solomon reacted to his son in Blood Diamond. No matter what his child did, (and he participated in some horrific acts) he loved him and accepted him fully.

I write about having compassion for our children, about understanding where they’ve come from, and this is a perfect picture of love that reaches beyond the choices a child makes. Our children need to know that we will carry their pain, we will love them unconditionally, we will fight for them and want them in our lives every moment – even the ugly ones. 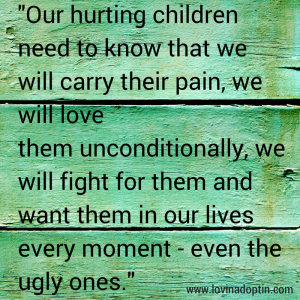 Even I can’t be reminded of this enough. It’s a simple concept, but so difficult to carry out. Yes, consistency and routine are important, a child needs to know there are consequences in life, but above those comes love and acceptance.

Reminds me of something familiar: “…For if I do not have love, I am only a resounding gong or a clanging symbol.” 1 Corinthians 13:1. It’s true for our children, if we don’t have an all accepting, inclusive love for them, they are aware of it. In the end, love will help heal their hearts, knowing that no matter what they do or how they act, they are treasured will make all the difference in the world.

*The intent of this post is not to recommend the movie, Blood Diamond. It’s not appropriate for younger audiences as it contains graphic scenes, however, it is based on true events which took place in Africa during the Sierra Leone Civil War.

You can receive each post made to Lovin’ Adoptin’ by subscribing in the upper right corner. If you’re on a mobile device, you can do this on the web version. You can also follow me on Facebook, Twitter, and Pinterest for more helpful information and links.