I have Autism, and the world treats me differently.

If your child has Autism, you know what I’m talking about. The stares, questioning looks, noses stuck so far in the air you’d think they were preparing for a dental exam, questions, comments, avoidance, accusations, recommendations, and rarely, smiles.

There are a variety of ways others respond to our Autistic children. A persons perceptions are sometimes based on their previous experience with Autism. This can be problematic because every child with Autism is different, they all have varying abilities.

If someone knows a person who has Aspergers (a form of Autism), they may expect another child with Autism to act the same way, trying to fit them in a peg hole. For example, our son, Jeremiah, has nonverbal Autism and has struggled developmentally, he is nothing like a child who is on the other end of spectrum. Some people assume he can talk, or understand directions that aren’t in his every day life. They assume we can take Jeremiah to events and he’ll stand next to us. It goes on and on.

They don’t realize that Jeremiah isn’t every other child on the spectrum.

A few of my friends have Autistic children who have more abilities than Jeremiah. In one area, they act very much the same, but in others, vastly different. One friend took her son to a get-together with friends, her son stayed near them and they were able to converse with others. What a strange and utterly impossible idea. For us. What would that be like? We don’t know because it’s never happened. Those who don’t have a child with Autism or aren’t immersed in the intricacies of it simply think that our children don’t behave and that we should do something about it. Ha! I give them a day to try, well not really, because they would want to strangle Jeremiah, and it would consummately devastate him.

Many times people say to me, “Autistic people are SO smart.” I agree, they are smart, but we don’t know if Jeremiah is a savant with a “special ability” that’s unique to him and him alone, nor do we expect it. He used to put shapes in the shape sorter faster than any adult – or at least I would bet on Jeremiah if it were a race, but he no longer plays with the shape sorter. As I’ve said here before, Jeremiah is ALWAYS in flux. Part of this expectation (Autistic people are so smart) comes from a person’s experience with a child that was able to speak and communicate in some form. Jeremiah does not.

When people see Jeremiah, it’s not obvious at first that he has a different ability, unless of course he’s waving his hands in the air like he just don’t care. If they’re around him for any amount of time, they should pick up on the fact that he’s different, doesn’t talk, doodles obsessively, stims (waving hands), and if it’s a bad sensory day, he’ll hit his head compulsively or try to bang it on the nearest available person.

And example of how others are treating Jeremiah is when we took the kids to the fair last week, and one of the employees said to Jeremiah, “Hey dude, high-five?” and held his hand up. I kindly said, “He has Autism and doesn’t talk.” Frankly, the guy seemed a little offended – okay, sorry he can’t give you a high-five. He said, “Hi,” and I said “Hi” for Jeremiah. The patrons standing behind us in line stared down at Jeremiah, no smiles. I don’t mind staring IF the offender smiles. 🙂

Our daughter, Payton, said, “Mom, those people are just staring at Jeremiah!” Payton has a very tender heart toward her brother, she’s his little protector. You can read more about how their relationship here. Sweet Payton couldn’t figure out why someone would stare at Jeremiah. I said, “If they’re smiling at him it’s okay.” She said, “They weren’t, they were just staring, like this,” then gave me an example. I said, “Okay, it’s not nice of people to stare, and if someone is ever rude to Jeremiah, you stand up for him.” 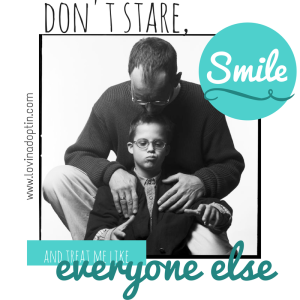 Unfortunately, the stares are going to worsen. Jeremiah is growing and it’s more unacceptable than it used to be that he’s riding a wagon through the Farmer’s Market, or that he’s waving his hands in the air, he isn’t talking, his cry sounds like an infants, he’s screaming. He’s standing out more and people are noticing, hence some of them are gawking.

When we’ve had to explain to others that Jeremiah has Autism, we’ve received several reactions. (Usually the explaining comes because someone says hi to him). Someone knows someone who has Autism, they offer advice, they stare, not really knowing what Autism is (how this happens really boggles my mind), smile and move away, uncomfortable.

While on vacation this summer, Jeremiah was swimming. A woman who floated by him said “Hi”. Justin said, “He has Autism and can’t talk.” The woman smiled and said, “Oh,” and swam away. Hmmm. Autism isn’t contagious. Really.

Others responses to Jeremiah’s Autism have been flying in my face recently. Just the other day we were at my husbands High School reunion and we were asked, “Why would you adopt a child who has Autism?” Wow, what do you say? There were several retorts I could have thrown, but I didn’t feel like his question was directed in spite, so I told him why (the nice version). I honestly wish that others knew how awesome Jeremiah is, how very special he is, how I wouldn’t want to live my life without him, how I can’t imagine my life without him.

Our own family has had some interesting, sometimes unsatisfactory responses to our family. I can only imagine it’s because our family is so different, first we did foster care (we adopted both of our kids from foster care), and then Autism came into the picture. Because of these two major life altering scenarios, we do life differently. And so, we’ve been left out of holiday get-togethers. Family living in the same town has left us out of these celebrations. We can only surmise that it has to do with our kids, and now primarily because of Autism. Forget about my feelings on the matter, believe me, they run deep, but it isn’t fair to my children.

The only thing that’s going to make any difference is the Autism community kindly educating others on Autism. So, go out and educate. Go out and spread the smiles. Go out and share with the world how awesome your Autistic child is.

You can receive every post made to Lovin’ Adoptin’ by subscribing in the upper right corner. If you’re on a mobile device, you can do this on the web version. You can also follow me on Facebook, Twitter, and Pinterest for more helpful information and links.