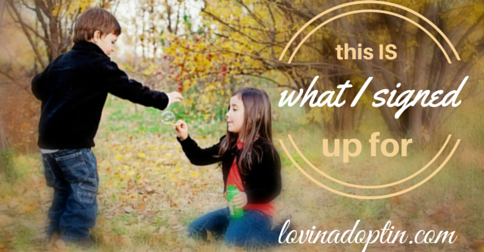 Last week I shared what fun has been going on here. After sharing this with a friend, she said, “It’s not what you signed up for is it?” (A little background if you haven’t been around for long: Justin and I adopted two children from foster care, Payton is seven, and Jeremiah has non-verbal autism and is five. You can read more about Our Story.)

My friends words broke my heart, and shocked me. The strange thing is I share both the positive and negative with her, and before the last few weeks, Jeremiah and Payton had been doing really well, and most of my complaints center around how much pain I’m in, or how our family isn’t getting support.

What she said was also a reflection of how she feels about her life. Life has disappointed her, and she feels it’s not what she signed up for, but it’s not how I feel. I think she feels that if she isn’t happy with her life, which doesn’t have near the complications mine does (and that’s okay), I couldn’t possibly be happy or satisfied with mine.

However, I do love my life. Yeah there are hard times, but that’s a given with what our family is made of.

I didn’t sign up for the expected, I signed up for the unexpected. Especially when I adopted two children from foster care. But frankly, most of the time life doesn’t go exactly as expected, and if it does, it’s probably fairly boring. Ha, when I hear people complain that their life is boring, I want to yell, “Come visit me! I’ll help you out with your boredom!” 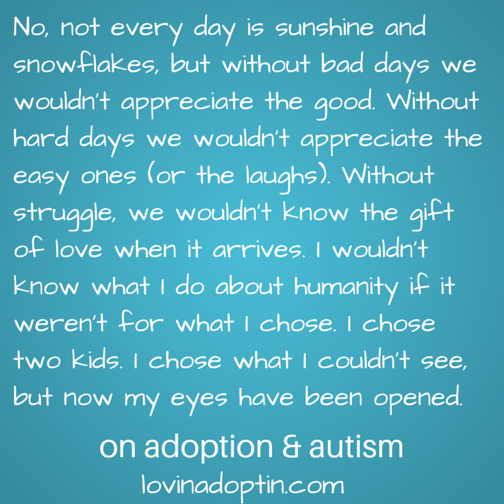 I signed up for love, and I got it a million-fold. Jeremiah was crying last night when Justin put him to bed. He would cry a little and stop, cry a little more. This is odd, he usually stays in his room and plays until he falls asleep, so Justin offered him some crackers and water (that’s normally the only reason Jeremiah cries at bedtime – he needs something else), but he wanted neither. He wanted to watch a movie. Odd.

I asked Jeremiah what he wanted, he went to the movie again and picked it up, I sat it down and told him, “No movie, it’s bedtime.” He cried again. I laid down with him on his bed and held him, but he kept circling in and out of crying. I asked, “Did you have a bad dream last night?” It was the only reason I could think of for him to not want to go to bed. He stopped crying and looked me in the eyes. This is sometimes his way of saying, “Yes.” I responded, “I’m so sorry you had a bad dream or nightmare. I’m here and Daddy’s here, you’re safe.” He wiped his darling eyes and began to drift off into sleep.

I’m so glad I was there for him, even though it might not be what I planned on doing for those twenty-five minutes (I had laundry, and watering to do). Love, I do it because of love, and I loved those moments we had together, when he knew I would keep him safe, I would push away those horrible, scary feelings, the connection when I understood what could not be spoken.

I signed up for a child who could have a mega-ton more problems than he does. Frankly, we’re lucky he only has autism, it’s nothing compared to what it could’ve been.

I signed up for learning a whole new rulebook on life.

I signed up for the unexpected challenges that have changed me forever, and hopefully have made me a better person.

I signed up for really seeing humanity, viewing those people who are different in a whole new way.

So, yeah this IS what I signed up for.

You can receive each post made to Lovin’ Adoptin’ by subscribing in the upper right corner. If you’re on a mobile device, this may need to be done on the web version. You can also “like” my Facebook page and follow me on Twitter and Pinterest for more helpful information and links.

11 replies to this IS what I signed up for (autism, adoption, and all of the above)