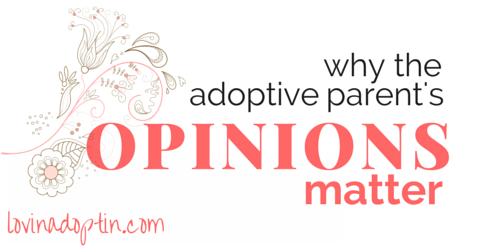 Everyone has opinions, and when you adopt or foster, you get ideas on how you should raise your kids from every which way.

Birth mothers want to be called “mom,” or “mother,” but you want to refer to her as “birth mom.” Your son would like to call her, “tummy mommy,” but his birth mom wants to be referred to as “Mom.” What do you do? Older adoptees share their opinions on how we should raise our kids, what we should tell them, what not to say.

Our world is so focused on always being politically correct, and yes, there’s definitely a necessity for that, but it seems that in the case of adoption it takes away from what adoptive parents want. It’s as if our opinions don’t matter, and I’ve been told by adoptees exactly that, my feelings and perspectives don’t matter. Other parents have been told by their child’s biological family what to do and what terminology to use. But my feelings as an adoptive parent do matter, because I’m the one who adopted my child, I’m the one who’s raising them.

No one person can tell everyone else what to do with their adopted or foster children. Just as in families who have all biological children, you won’t see two families who do things exactly alike. No one group of adoptees can tell every adoptive family how to raise their kids and how it’s going to end up in the future. 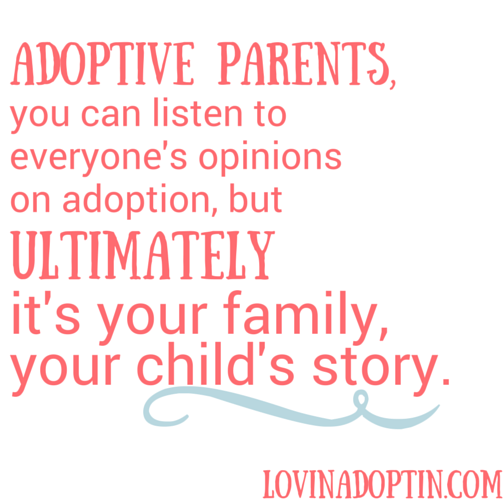 Is it important listen to adoptees? Absolutely. However, when their opinions come with too many absolutes, then it’s time to beware. As adoptive parents we can also choose the voices we want to surround ourselves with. We can hear the less positive opinions from adoptees about adoption and foster care, but we can choose not to surround ourselves with it after hearing it the first time.

After hearing what those involved with Flip the Script had to say, I was told I didn’t want to hear what they had to say. I wasn’t the deaf one, I heard them.

It’s kind of like a pregnant woman. Does she want to hear negativity from the mother whose birthing experience was horrible, endless hours of excruciating pain, how carrying that child wrecked her back, she was bed-ridden, unable to do anything she enjoyed. Or, do would the newly pregnant mother want to surround herself with mothers who had a good, positive experience? Will she hear the negative? Yes. But what will she choose to listen to the most. And I would like to add, it’s ALL in the way it’s said.

Many adoptees involved in the Flip the Script movement tell us we need to listen to them, and that us adoptive parents don’t matter in the equation.

Madeleine Melcher wrote an article, What an Adoptee Wants You to Know About Adoption. In it she says, “Parents: there is no voice on or about adoption that is more important than YOUR ADOPTEE’S.” She also says,

“Adoptees have different feelings about their own adoptions.”

I love what Madeleine says. It’s true, our children’s voice comes first. Then come ours (shocker) because we’re the ones raising them. We should listen to others who’ve been there, but we get to choose who we want to surround ourselves with.

Unlike what some adoptees would like us to think, each child will have their own views of their adoption. Yes, it’s up to us parents to listen to a variety of voices on the subject, including those who’ve been adopted and fostered, but those voices are going to vary too.

Because everyone has their own story, shaped by their own experience.

Here are some more posts that may interest you:
Are Your Worries About Your Child’s Future Stealing Joy from the Present?
Birth Family Relationships

You can receive each post made to Lovin’ Adoptin’ by subscribing in the upper right corner. If you’re on a mobile device, this may need to be done on the web version. You can also “like” my Facebook page and follow me on Twitter and Pinterest for more helpful information and links.