Do you have a young child who doesn’t obey when you ask her to do something? Does your child smile at your from the top of the table when you’ve asked him to get down? Do you have a newly (within the last year) foster or adopted child who is older but doesn’t do what you ask?

It’s definitely possible that your child is ignoring you,

but it also may be that they don’t understand what you want them to do. Today I will give you some steps to help your child understand you, and after you’ve tried this for a few weeks you’ll know if his behavior is stemming from something else. (All behavior is communication so it’s important to get to the bottom of the actual problem.)

When we were working with speech and developmental therapists to help our son, Jeremiah, they suggested I say, “Get down,” instead of, “Get off the table.” The therapists point was first, to keep it short, and second, to end the sentence with the action I wanted to take place. If we say, “Don’t throw sticks,” the child may only hear the last word or two, “throw sticks.”

At first, I didn’t really like the advice. I come from a background in education and I talked to kids in full sentences. I believe children are much smarter than we give them credit for, and I noticed it first in the children I worked with in an educational setting. I had also talked to my daughter, Payton, in full sentences and it worked well. Even though she was in multiple homes while in foster care before coming to us, she still understood.

But each child is different, and although children from similar backgrounds can have comparable behaviors, they can also have some that vary.

While I’ve talked before about how intelligent our hurting children can be, some can have cognitive delays, and most have developmental delays.

A child who comes from multiple homes (multiple foster care placements, biological homes that are unstable) or even a couple, may not have a language foundation for understanding guidelines, in fact, there probably were no set guidelines. Some days they did whatever they wanted and other days parents and caregivers came down with a vengeance, expecting perfection.

So, with this basis of understanding we can give our children a foundation to start on. When telling your child to do something: 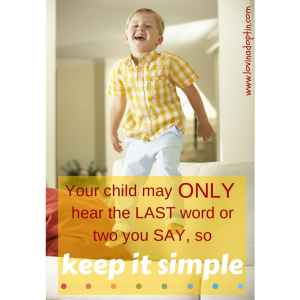 When you have a child who isn’t obeying, you may want to consider their past experiences. Many times you won’t know what that experience was like. Often I hear parents saying, “Their birth parents weren’t abusive, they just didn’t take good care of the kids,” and other such statements. Really, we don’t know what happened in our child’s previous home(s). We don’t know if our child was screamed at, hit, expected to carry far more responsibility than they should, if expectations of behavior existed, whether those expectations varied. And, for a child who speaks a different language, even after learning your language, there can be a communication breakdown, especially with English, as it’s complicated.

We don’t want to belittle our child’s intelligence, so use full sentences when you aren’t asking your child to do something. Simple directions can go a long ways and you can build on them as your child begins to follow those directions.