What equates a torture device? Something that makes someone go crazy? I’ve come upon two organizations in the last few months who use torture to get what they want (and really in the end they aren’t getting what they want). You may think this doesn’t happen any more, it’s 2014 for goodness sake. Well, that’s what I say, except, it is real, and although we feel we’re such a progressive society, there still exists this idea that you can somehow work the Autism out of a person.

What if your child was confined in this?

I hope if you’re a parent of Autism you continue to read this, so you can be aware and advocate for your child. If you’re not a parent of Autism, I hope you read on because we need you to be another voice for our children, our teens, and adults who aren’t being treated as “typical” human beings.

The photo above was the latest shock, a “scream room” in the Deer Valley public school district in Phoenix, AZ. I was livid when I saw the photo and read the article. A padded, completely closed-off cell in a public school? My blood boiled, feeling angry, scared for the children who must have been frightened out of their minds when placed in an isolated space. I’m claustrophobic, and being in there would drive me absolutely nuts, and it would be a million times worse for an Autistic child. I can’t even wrap my mind around it.

Just for some perspective, we used to put Jeremiah in his room when he was having a really difficult time. He was able to calm down in his space. I hadn’t put him in there in a while, but he was having behaviors I couldn’t handle, so I wanted him to calm and settle in his room.

This time it wasn’t the same. We’ve done it twice and won’t do it again. Why? He was in there less than three minutes and he went out of his mind both times. He screams often, happy screams, screams when he’s mad, but this was a whole new level, he was furious. He screamed up to the moment I opened his door, then he shut himself off from the world, this faraway look in his eyes. Some with special needs may have this look, but Jeremiah doesn’t, so it scared me. I held him, but he climbed out of my arms and just sat there on the couch, staring. Why did I even do it a second time? I’m human. I wish I wasn’t. If being in his room with toys, windows, a comfortable bed affected Jeremiah so negatively when he was in a disregulated state, what would it be like for an Autistic child to be placed in a “scream room”?

In 2012, after this report came out about the “scream room” in Phoenix, Arizona, house bill 2476 was passed, in part it says, “Beginning in school year of 2013-2014, disciplinary policies for the confinement of pupils left alone in an enclosed space. These policies shall include the following:

I’m not a professional at reading senate bills, but it seems to me that no criteria has been put in place, except that parental consent is required. The bill does not define the amount of time a child can be confined, nor the size of room the child can be restrained in. Autistic children hit themselves, pick at their bodies, pull their hair. This is called self-injurious behavior. This is cause for confinement under the house bill in Arizona.

I found another explanation of the house bill here, which explains the school has permission to use confinement if the child poses harm to himself or others, even if a parent has NOT given prior consent. The administration then needs to notify the parents the day the confinement takes place.

In my opinion, which I stand strongly on, the use of a secluded room is unacceptable, it’s a cruel punishment that should never be implemented. Never.

In a February 2014 ABC news report by Angela M. Hill and Matthew Mosk, they say, “The Senate findings mirror those in a 2012 ABC News investigation which found that thousands of autistic and disabled schoolchildren had been injured and dozens died after being restrained by poorly trained teachers and school aides who tried to subdue them using at times unduly harsh techniques.”

The report also mentions the case of eight-year-old girl, who has “attention and hyperactivity disorders” from Minnesota who was closed in a room alone forty-four times in one year. This took place in spite of her parents and behavior consultant opposing the strategy.

A dismal eighteen states require parental notification when a child has been restrained in a school setting.

This video was released in 2012 of a teen boy named Andre, being shocked thirty-one times at the Judge Rotenburg Center (JRC) for developmentally disabled students. WARNING: This video is graphic, it may be disturbing to some and is not suitable for all audiences.

Why did the staff use shock therapy on Andre? Because he wouldn’t take his coat off. He had to wear someone else’s clothes that day, and was embarrassed, therefore insisted on wearing his coat, which the staff did not approve of. This “situation” took place in 2002, and went to trial in 2012.

Over at the Autistic Self Advocacy Network, Shain Neumeier says of the JRC trial, “After several more hours of jury deliberations the next day, the parties agreed to settle for an undisclosed amount of money…Ever since their clients signed onto this agreement, the defense attorneys have insisted that JRC and the three individual defendants were not liable, and have defended Andre’s treatment as reasonable. They went so far as to say they were glad that the tape was shown in court, allowing the jury to see that Andre was receiving proper treatment at JRC.”

I’m shocked, literally pained, and appalled by all of this. If this is happening in one school district or “center” it’s taking place in others. These are not isolated instances. 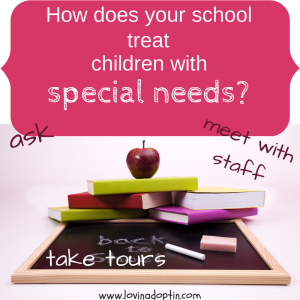 One message we should get from this is strong and clear, we have to constantly be advocates for our children, teens, and adults if they move on to day camps or other living arrangements. Whether it be at school, church, a therapy office, or daycare, we have to be aware of what’s being done to those with Autism. Don’t just call or email your school and ask if they use isolation rooms, scream rooms, or if they seclude children with special needs, take a tour of the school while children are in class. Ask questions. Talk with other parents of special needs children. Emails and phone calls won’t get you answers, you need to be present. Pick your child up sometimes, don’t only rely on the bus system. Talk with teachers, paraprofessionals, and aides. Know what everyone is doing with your child.

In response to these atrocities being used on people with special needs, some say, “But it worked for my child,” “It worked for me,”  or “I work with the special needs population and I’ve seen it make a difference.” I say for everyone it did help, it harmed several more. The question should be asked, “Would you do this with a typical child [or person]?” This question was brought to my attention by Heidi Lostracco on Speak for Yourself. I think the answer in these cases, with both “scream rooms” and shock therapy, would be a resounding, “NO!” And if it’s not okay for a typical child, it’s not okay for a child with special needs of any kind.

Please share this with others so everyone can be aware of what’s happening to children with special needs. They don’t have a voice, but you do.

What do you think of the implementation of “scream rooms”? What would you do if you found one in your child’s school? Would not signing a consent form be enough to ease your mind that your child wouldn’t be placed in one?

You can receive every post made to Lovin’ Adoptin’ by subscribing in the upper right corner. If you are using a mobile device, this can be found on the web version. You can also follow me on Facebook, Twitter, and Pinterest for more helpful information and links.

1 reply to “scream rooms” and shock therapy being used on Autistic children: Do you know what your school’s doing?