A baby needed a loving home, how could we say no? We got the call from Child Protective Services on December 17, 2009, they told us no one else could take in a three month old boy. The list of issues his biological parents struggled with was extensive. Schizophrenia, bipolar disorder, extremely low IQ’s, and a host of medications his birth mom had been on while pregnant were just the beginning.

Jeremiah, an adorable little boy, came through our door the next day. Sadly, his 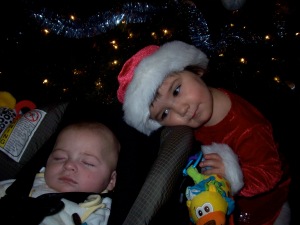 zipper was melted together on his sweatshirt and pieces of it were adhered to the inside of his hood. A horrible case of cradle cap covered his bare head and dirt had settled in all the cracks and crevices on his tiny body. What we thought was a small baby turned out to be quite long. At three months, he still held himself in the fetal position.

We moved forward with caring and pouring out our love on this little boy. He cried constantly and many issues plagued him; sensitivities to most formulas, gas, and two years later we found that he’d most likely been suffering from Sensory Processing Disorder (SPD).

I cared for Jeremiah as if he were my son. I worried about what this child’s future held. Would he have to fight against the terrors of schizophrenia? Would he suffer from the afflictions of bipolar disorder? How would we help keep these disorders from tormenting him? I finally came to the conclusion that all I could do was love him, and pray. A lot. After his adoption was complete, it comforted me to know that no matter what he would go through, he would always be with us.

Jeremiah was always behind developmentally, so we wondered if he would ever catch up. He didn’t get a good start on life, but we had hope that he would gain skills as he grew. In the end, all we really hoped for was his happiness. 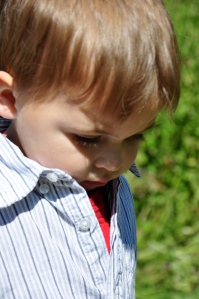 Because he was adopted through foster care we were blessed with tremendous support from our local Developmental Services. When he was two and a half, the two therapists that were coming to our home to work with Jacob, found that he had SPD. He had cried so much until that point, I was concerned we weren’t finding an underlying problem because of his birth mom’s legal narcotic use.

After implementing a sensory diet (tools to help his sensitive sensory needs) we saw our first amazing transformation. He stopped crying! Well, there was a significant drop in the intensity and frequency anyway.

That summer he was also diagnosed with Autism. It wasn’t the blow of devastation to us that many parents feel when their child is diagnosed. It wasn’t that we were really strong individuals, it’s because we didn’t have expectations of a perfectly healthy child. When he came to us there were obvious delays and a genetic history that didn’t look so good.

Yet, not everything was rosy. I still grappled with the “why.” Why did this little boy have to battle something else? Weren’t being neglected, being in foster care, SPD, and developmental delays enough? I grappled with this question and I cried, a lot. I wasn’t upset because he had Autism, I was grieving because he had another obstacle to overcome, and we, his parents who acted as practitioners, speech and occupational therapists, and problem solvers extraordinaire didn’t feel like we had any energy left.

Somehow, we reached deep inside and moved forward.

Honestly, despite all the other emotions and thoughts, the word “Autism” gave us answers. We now had a specific diagnosis to learn about. We could find precise ways to help Jeremiah. As I researched Autism, I felt an enormous amount of relief. Sounds strange I know, but there were others struggling with the same things we did every day.

Despite those struggles, Jeremiah is our bright spot. His smile brings joy to everyone who meets him. When therapy gets tiring, when searching for something healthy he will eat gets exhausting, when his crying and whining spells take their toll, when worrying about him becomes overwhelming, in the end he always brings happiness to our home. When Autism doesn’t get in his way and send him back to endlessly spinning toy car wheels, he makes amazing progress. We are so proud of this little guy. He has taught us what we can gain by opening our hearts.

Our other bright spot is our daughter, Payton. She was also neglected and placed 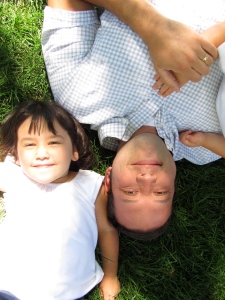 in foster care very young. Dealing with a host of disorders stemming from her early life, the growth, love, and compassion she exhibits towards her brother defies it all. She is acutely aware of his needs, always helping him with something, letting us know if he needs anything. My heart fills to bursting when she notices Jeremiah doing something that is rare or something he has never done before. The other day while sitting at the dinner table, Jeremiah leaned his head on his daddy’s arm and was smiling. Payton exclaimed, “Look, that’s so sweet.” She knew he had never done that and was so excited for him.

A family member of ours always expresses her concern for Payton and the difficulty of having a sibling with special needs. Will he get more attention than her? Probably. But we try our best to balance it out. I fully believe that Payton is a much better person because of her brother. He has shown her a world that is not known to many. And she’s only four! I look forward to seeing what his special needs will teach her about life and others.

We all have better, more fulfilling lives because of our son’s special needs. Trials in life are rarely desired, but how can we not grow when faced with them? How can we not see life from a completely different perspective? I never could have envisioned how much special needs would change me.

Before Jeremiah’s adoption, the CPS worker who had originally made the calls to place him in foster care, admitted that no one would take him the day they had called us in 2009. The shift from the words “could” to “would” were profound. I am thankful no one else opened their door to him, because that means I get to raise this precious child. It means that our life has been enriched beyond imagination because of him. Those who rejected him are the ones who have missed out, not us.